Burke Brothers Book 2
Teresa's enthralling historical romance featuring bad boy Maximillian Burke from ...
Maximillian Burke has always prided himself on being the man every mother would want her daughter to marry. But after his scoundrel of a brother makes off with Max's bride, Max discovers it's more satisfying to be a rogue than the perfect gentleman. Forced to flee London after a duel gone wrong, Max seeks refuge at Cadgwyck Manor on the lonely coast of Cornwall, a place as wild and savage as his current temper. The tumbledown manor comes complete with its own ghost but oddly enough, it's not the White Lady of Cadgwyck who begins to haunt Max's heated dreams but his no-nonsense housekeeper.

The Pleasure of Your Kiss 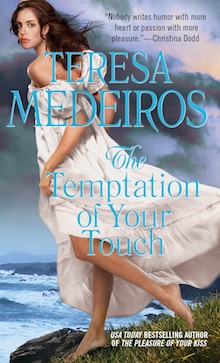 The Temptation of Your Touch
Now Also Available in the UK, Australia, New Zealand
Click for links and info!