Goodnight Tweetheart
Available as an E-Book in the UK, Australia, New Zealand and in English lanugage editions all over the world

Bestselling author Abigail Donovan almost won the Pulitzer Prize and did win Oprah's stamp of approval. So why is she spending her days--and nights--hiding in her expensive New York City condo with only her two cats for company?

When her publicist drags her into the world of social media, Abby figures she'll meet some 14-year-old living in his mom's basement. But instead she finds Mark Baynard, a sexy and quick-witted English professor traveling the world in search of adventure. Although she tries to resist his charms, Mark begins to shatter Abby's writer's block one wickedly funny encounter at a time.

But just when she begins to write--and live--again, Abby discovers Mark is hiding a secret that could change both of their lives forever.
In the tradition of YOU'VE GOT MAIL and SLEEPLESS IN SEATTLE, two lonely people discover it doesn't take a status update or 140 characters to find true love, just three little words.
*This Special Enhanced Edition Includes Bonus Epilogue and Photos
Kindle
Buy in the UK
Buy in Australia/New Zealand
Apple/iBooks
Buy in the UK
Buy in Australia
Buy in New Zealand
Kobo
Buy in the UK, Australia/New Zealand or any other available territory
Google
Buy Google 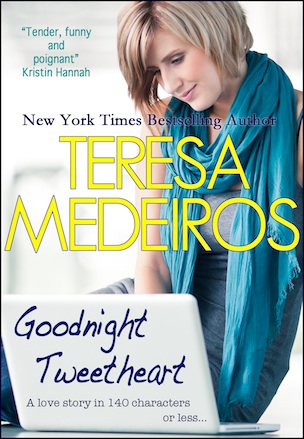