After Midnight
Available as an E-Book in the UK, Australia, New Zealand and in English lanugage editions all over the world

"Our sister is marrying a vampire."

When the ever practical Caroline Cabot first hears those words from the lips of her fanciful youngest sister, she accuses Portia of having a wild imagination.
But when she discovers their sister Vivienne is actually being courted by Adrian Kane, the mysterious viscount rumored to be a vampire, she decides to accept his invitation to a midnight supper and do some sleuthing of her own.

To both her delight and her dismay, she soon finds herself falling under Kane's bewitching spell. After all, what's a proper young lady to do when her sister's suitor arouses more than just her suspicions? 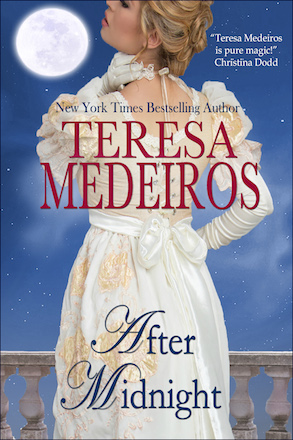 Book 1 in the Lords of Midnight Series